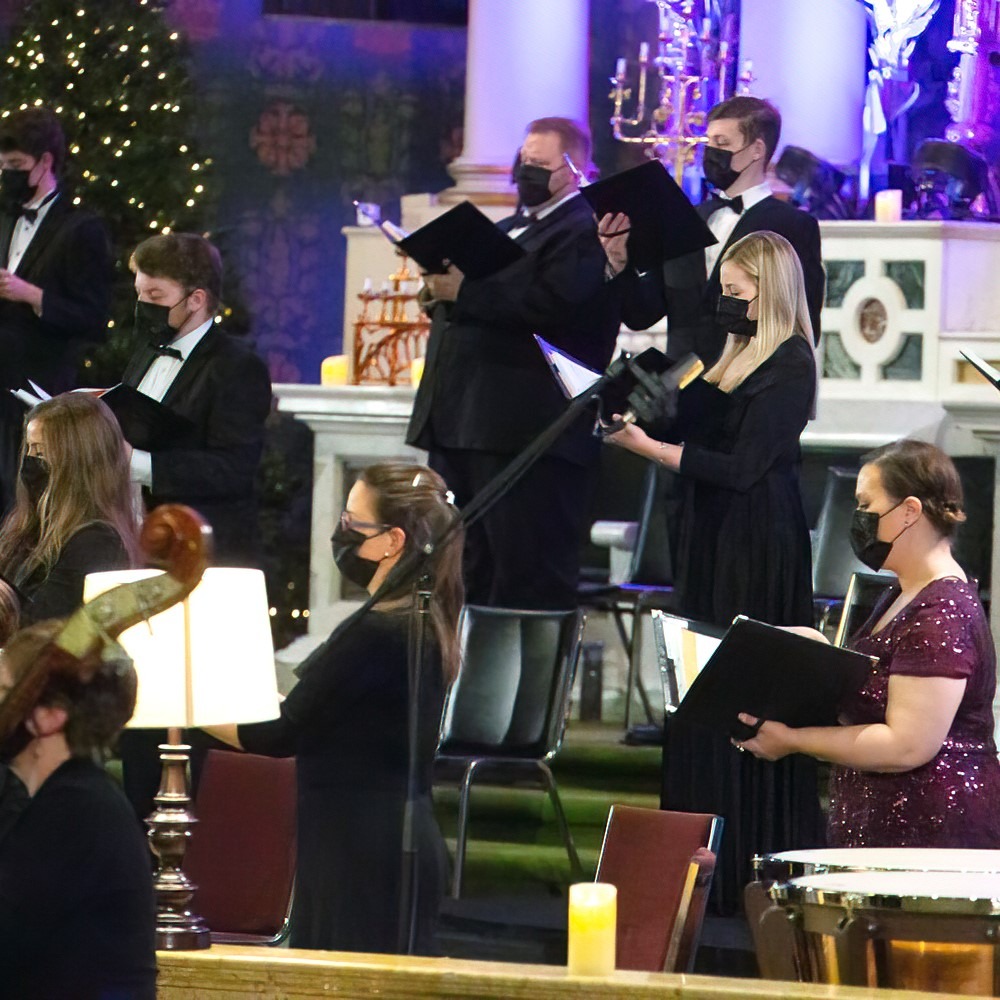 Join us before the concert for our digital pre-show Listen Up! hosted by Dale Jarvis. Listen as we go behind the scenes with interviews of the artists, musicians and composers behind our concerts. This edition features: Kathleen Allan, Maria Lacey and Doug Dunsmore. Watch Now.

Unwind with a pre-show cocktail! This week’s feature is the Santa Clausmopolitan. Let our friends at Piatto show you how to channel your inner mixologist here!

About Kathleen Allan: Kathleen Allan is the Artistic Director and Conductor of the Amadeus Choir of Greater Toronto, Artistic Director of Canzona, Winnipeg’s professional Baroque choir, and a Visiting Professor at Western University. Originally from St. John’s, NL, Ms. Allan is in high demand as a conductor, composer and clinician and is equally comfortable working in early, contemporary, and symphonic repertoire. In 2015, Ms. Allan made her Asian debut conducting Handel’s Messiah and Bach’s Christmas Oratorio in Japan, and in 2019 made her conducting debut with the Vancouver Symphony Orchestra. Until 2019, Ms. Allan served as the Director of Choral Studies and Associate Conductor of the Symphony Orchestra at the Vancouver Academy of Music. She was the 2016 recipient of the Sir Ernest MacMillan Prize. She is a founding co-Artistic Director of Arkora, an electric vocal chamber consort dedicated to blurring lines between the music of our time and masterworks from the ancient repertoire. Her compositions have been commissioned, performed and recorded by ensembles throughout the Americas and Europe. She is published by Boosey & Hawkes, Cypress Choral Music, and is a MusicSpoke composer. Also an accomplished soprano, she has appeared as a soloist with the National Broadcast Orchestra, Berkshire Choral Festival, and the Vancouver Symphony Orchestra. In addition to freelancing regularly in Canada and the US, she has performed with the Vancouver Chamber Choir, Early Music Vancouver, the Arnold Schoenberg Chor (Vienna), and Skylark Vocal Ensemble (Atlanta). She holds a bachelor’s degree in composition from the University of British Columbia and a master’s degree in conducting from Yale University.

About Maria Lacey: Newfoundland soprano, Maria Lacey, has performed in New York City as “Elle” in La voix humaine, Poppea in L’incoronazione di Poppea (Bare Opera), Despina in Così fan tutte, Madeline Usher in The Fall of the House of Usher, and Amy in Mark Adamo’s Little Women (Mannes Opera). Additional roles include Susanna in Le nozze di Figaro, Lauretta in Gianni Schicchi, the title role in Massenet’s Cendrillon, and Rose in Street Scene. She attended SongFest as a Los Angeles Opera Eva and Marc Stern Fellow, and performed with Steven Blier as a resident of the New York Festival of Song in the Emerging Artist series. Maria also made her Alice Tully Hall debut as the soprano soloist in Last Train to Tomorrow, conducted by the composer Carl Davis. Maria was proud to perform Haydn’s Missa in Angustiis with the Newfoundland Symphony Orchestra conducted by Maestro Marc David. She also performed with the COC Orchestra under the baton of Maestro Johannes Debus as a finalist in the Canadian Opera Company’s Centre Stage Competition and looks forward to being a finalist in Vancouver Opera’s VOX Competition. She holds a Bachelor of Music from Eastman as well as a Master of Music and a Professional Studies Diploma from Mannes, for which she was awarded the Michael Sisca Opera Award for “extraordinary promise for the future.”

Abra Whitney, contralto: Abra is a very active member of the local arts scene in St. John’s and holds a BMus in Vocal Performance and an MMus in Choral Conducting, both from the University of Alberta. She has been a singer, actor, clinician, conductor, and educator for the past 7 years in St. John’s, and recent credits have included Chorus Master/Ensemble for Opera on the Avalon’s Shanawdithit and The Phantom of the Opera, Mary, Only Young (RCA), Florinda, Into the Woods (Opera on the Avalon) and Alto Soloist in Händel’s Messiah with the Bay of Islands Musical Arts Chorus in Corner Brook. Abra has also been a featured soloist in Our Divas Do Christmas (TaDa!), An Evening of Andrew Lloyd Webber (Theatre St. John’s), and From Eve to Mary (Blackmore, Duff). As a producer/ performer, Abra has created her own shows celebrating the music of Edith Piaf, Nina Simone, and Gladys Knight & the Pips. Abra has also been a member of Shallaway, QVE, ProCoro, and is a current member of Projekt Chamber Voices and Lady Cove Women’s Choir. She is currently teaching voice, piano and is a Kindermusik teacher at Intervals Music Studio.

Branden Olsen, baritone: Branden Olsen is a rising Canadian baritone, pedagogical clinician, and conductor of special promise. Born in Quispamsis, New Brunswick, Branden has performed as a singer and as a choral director for the last decade, winning awards and prizes for both conducting and vocal performance. He has performed in Canada and Europe in diverse operatic roles spanning the Baroque to Modern Day. Olsen is excited by and thrives in new and challenging musical situations. Branden received his Bachelor of Music Mount Allison University Sackville, N.B – 2017 with focus on voice and conducting. He has recently finished his Masters of Music at Memorial University in St. John’s, NL in voice performance and will complete his Masters in Choral Conducting in the spring. During the pandemic Branden has taken the opportunity to work with and learn from some of the industry’s leading figures, such as Nathalie Doucet, Susan Manoff, David Pomeroy and Christine Goerke. He is grateful be a part of this year’s Messiah and is excited to participate in a wide variety of online programs and projects during the year to come.

About Händel’s Messiah: The creation of Händel’s Messiah was actually induced by his librettist, Charles Jennens. Jennens expressed in a letter to a friend that he wanted to create a Scriptural anthology set to the music of Händel. His desire quickly turned into reality when Händel composed the entire work in only twenty-four days. Jennens wished for a London debut in the days
leading to Easter, however, a doubtful Händel anticipated such a wish would not be granted. A year after the work was completed, Händel received an invitation to perform his music in Dublin to which he joyously agreed.

Messiah was met with eager ears at its debut on Friday, April 13, 1742 at Neal’s New Musick Hall on Fishamble Street. Händel had staged a public rehearsal the day before its premiere, creating quite a buzz. It is reported that hundreds of people were turned away due to lack of space. At its debut, Messiah was actually titled A Sacred Oratorio and all its proceeds were donated to local charities and hospitals for the mentally ill at the request of Jonathan Swift, Dean of St. Patrick’s Cathedral.

Since its debut, there have been many versions of Händel’s Messiah. Händel himself reworked and edited his score countless times to fit the needs and abilities of his performers. While the true original is lost in a sea of variations, today’s Messiah is as close to the original as music historiographers can agree upon. Though Messiah was originally intended as a thought-provoking work for Easter and Lent, it has become more of a Christmas tradition.