MASTER WORKS 1: YOU HAD ME AT "CELLO" 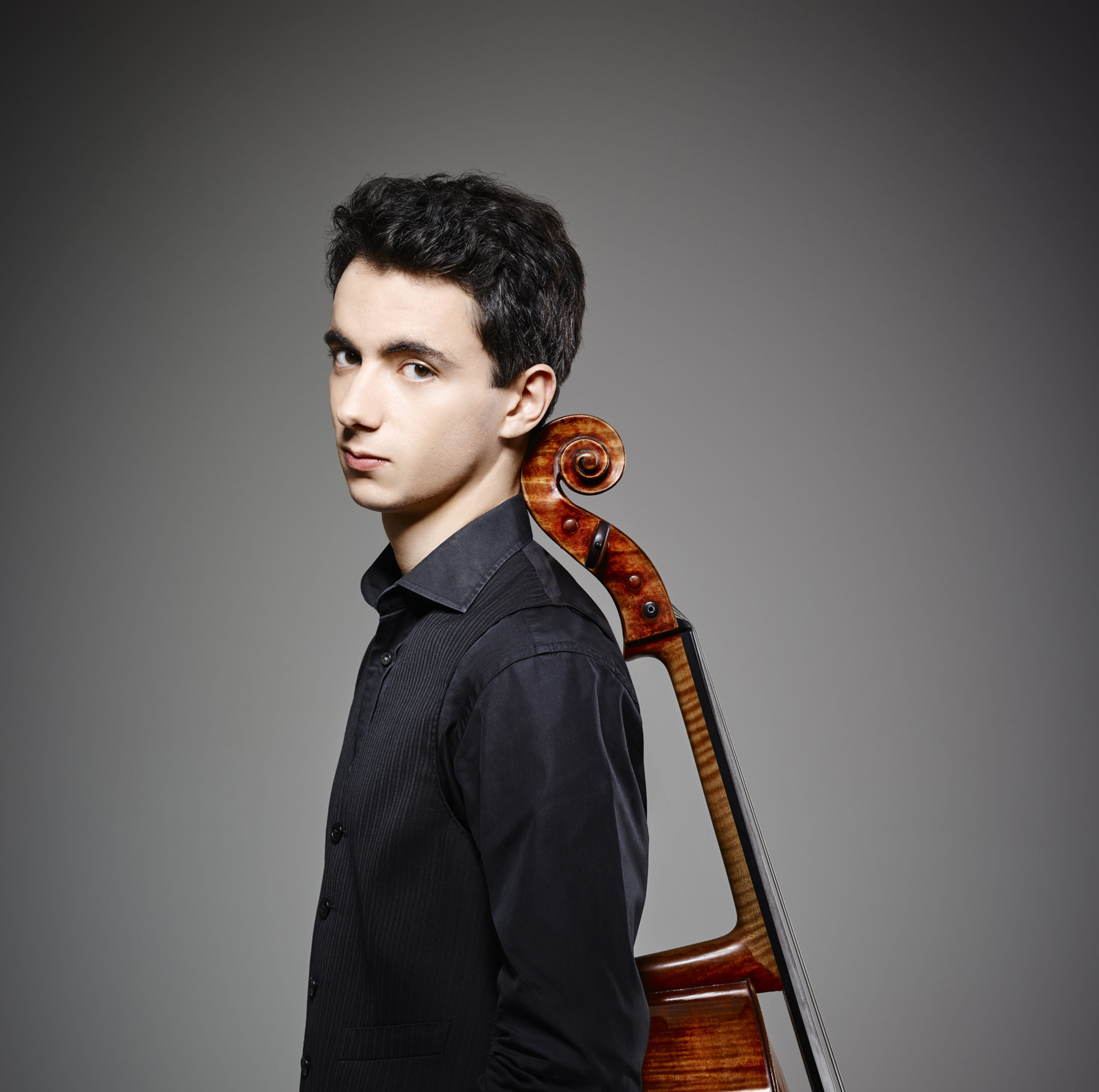 Join the Newfoundland Symphony Orchestra under the direction of Marc David as the NSO kicks off the 2021-22 season by welcoming back cellist Stéphane Tétreault for an evening of delightful classical music. The concert features Mendelssohn’s Hebrides Overture (Fingal’s Cave), Elgar’s Cello Concerto in E minor Op.85 and Brahms Symphony No. 3, Op.90. Don’t miss this world class performance from YOUR NSO together with special guest Stéphane Tétreault – Friday September 24, 2021 at the Arts and Culture Centre. Tickets are available at the ACC Box Office (729-3900), and online at www.artsandculturecentre.com. Masterworks 1 is presented by the City of St. John’s.

About Stéphane Tétreault – In addition to innumerous awards and honours, Stéphane Tétreault is the recipient of the prestigious 2019 Virginia Parker Prize from the Canada Council for the Arts in recognition of his outstanding talent, musicianship, artistic excellence, and his valuable contribution to artistic life in Canada and abroad.

Chosen as the first ever Soloist-in-Residence of the Orchestre Métropolitain, he performed alongside Yannick Nézet-Séguin during the 2014-2015 season. In 2016, Stéphane made his solo debut with the Philadelphia Orchestra under the direction of Maestro Nézet-Séguin and performed at the Gstaad Menuhin Festival in Switzerland. In the 2017-2018 season, he took part in the Orchestre Métropolitain’s first European tour with Maestro Nézet-Séguin and he made his debut with the London Philharmonic.

His debut CD recorded with the Quebec Symphony Orchestra and conductor Fabien Gabel was chosen as “Editor’s Choice” in the March 2013 issue of Gramophone Magazine. His second album with pianist Marie-Ève Scarfone featuring works from Haydn, Schubert and Brahms was chosen as Gramophone Magazine’s “Critics’ Choice 2016” and recognised as one of the best albums of the year.

Stéphane was a student of the late cellist and conductor Yuli Turovsky for more than 10 years. He holds a master’s degree in Music Performance from the University of Montreal.Stéphane plays the 1707 “Countess of Stainlein, Ex-Paganini” Stradivarius cello, generously loaned to him by Mrs. Sophie Desmarais.

At a time when Romantic composers increasingly looked to nature for ideas, Felix Mendelssohn (1809-1847) was no exception.  On a trip to Scotland in 1829, he was wonderstruck by the Hebrides Islands and especially by Fingal’s Cave. This massive sea cave is formed of towering hexagonal columns of basalt. Once inside, you can hear the waves of the Atlantic Ocean roaring in. Mightily impressed, Felix immediately jotted down the opening theme of the Hebrides Overture (1832) to send to his sister Fanny.  Despite his immediate flash of inspiration, it took him another three years of struggle before he was satisfied with the composition.  As Thomas Edison said, Genius is 1% inspiration and 99% perspiration!

The Hebrides (aka Fingal’s Cave) Overture is a single movement work intended to evoke the composer’s impressions of his trip. The B minor opening motive in bassoons and low strings recurs in various manifestations throughout the overture. As it rises to the violins, the motive is accompanied by restless 16thnotes. A lyrical melody in D major begins in cellos and bassoons as the accompaniment continues. Both ideas are developed, at times tranquil, at times threatening.  Highly imaginative orchestration includes swirling strings, solo winds and militant brass fanfares.  The music becomes more frenzied in an imposing orchestral crescendo, then evaporates in a rising flute arpeggio.

English composer Edward Elgar (1857-1934) rose to fame with his Enigma Variations in 1899.  His orchestral repertoire also includes two symphonies, a Violin Concerto, his Pomp and Circumstance Marches and the Cello Concerto in E minor, Op. 85. Written in 1919, this was Elgar’s last significant work for orchestra. Disillusioned by the futility, chaos and destruction of World War l, he wrote this brooding piece as a “lament for a lost world.”

The first movement, Adagio moderato, begins with a forceful recitative for solo cello followed by a short phrase in clarinets, bassoons and horns. The soloist returns with an ascending passage then yields to an unassuming main theme in violas. The cello is heard alone or combined with strings and winds as the meandering theme soars to a majestic reiteration by the entire orchestra. A new lyrical melody builds to an impassioned crescendo then subsides to make way for the cautious reappearance of the main theme.  Following another grand restatement, the solo cello ends the movement with a light pizzicato chord.

The second movement Lento-Allegro Molto is linked to the first by a pizzicato version of the  opening recitative. An orchestral crescendo, cello pizzicati and pregnant pauses create suspense until the virtuosicmoto perpetuo section begins. This movement is a showcase for the cellist’s technical wizardry. Sudden dramatic gestures interrupt the momentum as the movement races to a powerful pizzicato stop.

Elgar reveals his deep feelings in the Adagio movement. The soloist begins this lament with an expansive melody over subtle orchestral accompaniment.  As eloquent solo and orchestral passages ebb and flow, expressive rubati elicit heightened emotions and memories. Meditative and nostalgic, this movement ends almost imperceptibly.

With barely a pause, the main theme of the Allegro ma non troppo is introduced by an orchestral crescendofollowed by a new cello recitative and cadenza. The vigorous theme is a reminder of Elgar’s Pomp and Circumstance marches.  Fragments of this theme are extensively developed. Colourful winds and brazen brass interjections accentuate the cellist’s virtuosity. But lest we forget, the elegiac melody from the previous Adagio movement now returns in the Piu lento section, gradually slowing to a complete stop.   The opening cello recitative then reappears before the boisterous repetition of the main theme which soon comes to a brusque end.

Johannes Brahms (1833-1897) was a cautious perfectionist. Though determined to continue the Classical legacy of Haydn and Beethoven, he was so daunted by Beethoven’s reputation, it took him about twenty years to write his first symphony. Once that hurdle was over, he completed the next three in less than a decade.  Now confident of his skills, he dashed off his Symphony No. 3 in F major Op. 90 in in just four months in 1883.  It contains four movements in Classical forms.

The first movement Allegro con brio makes use of Brahms’ musical motto FAF (Frei aber froh/free but happy). Brass chords begin the upward motif and the orchestra continues with a falling arpeggio melody interspersed with three note passages. Constant variations of these ideas abound throughout the movement. Brahms’ alteration of the musical motto to F A-flat F creates underlying harmonic tension. The undulating second theme in winds led by clarinet becomes downright menacing in the development section.  A reflective episode begins with a solemn horn statement derived from the FAF motive followed by a slow reiteration of the falling arpeggios. After the stormy recapitulation, the mood changes and the opening theme ends quietly.

A bucolic air in clarinets and bassoons, answered by strings, begins the second movement Andante. A new melody in clarinets and bassoons, alternating with strings, includes a suspenseful two note motif.  After a return to the bucolic opening, there arises out of the calm a glorious melody in full orchestra, so unrestrained, as though it had long been simmering under the surface. Horns and trombones then accompany a rising arpeggio which brings this movement to a quiet finish.

The Poco Allegretto movement displays Brahms’ fondness for wind instruments, and his gift for poignant, winsome and expressive melodies. The opening theme features a rising third passage followed by a sighing downward motive.  First presented in cello, it continues in strings and then flutes and oboes. Other melodies emerge until the mellow horn restates the opening melody.  Clarinets and bassoons in thirds create unique sonorities before the full orchestra comes to a peaceful pizzicato close. Clara Schumann described this movement as “a pearl, but a grey one, dipped in a tear of woe.”

The last movement, Allegro-un poco sostenuto, begins with a furtive melody in strings and bassoons.  Beginning in F minor, the mood soon becomes militant and aggressive.  Brahms achieves miracles of thematic drama based on just a few of the opening notes. Full orchestral bombast is contrasted with delicate interludes in solo winds. This movement seethes with harmonic ambiguity and rhythmic complexity. As the turmoil gradually wanes the music slows down. Somber trombones, accompanied by wispy strings, play a melody which begins with the two-note suspense motive from the second movement. The opening FAF motive is heard in the background. The symphony closes gently in F major with a nostalgic reference to its opening theme, very faint, like a distant memory.