Presented by the Delta Hotel 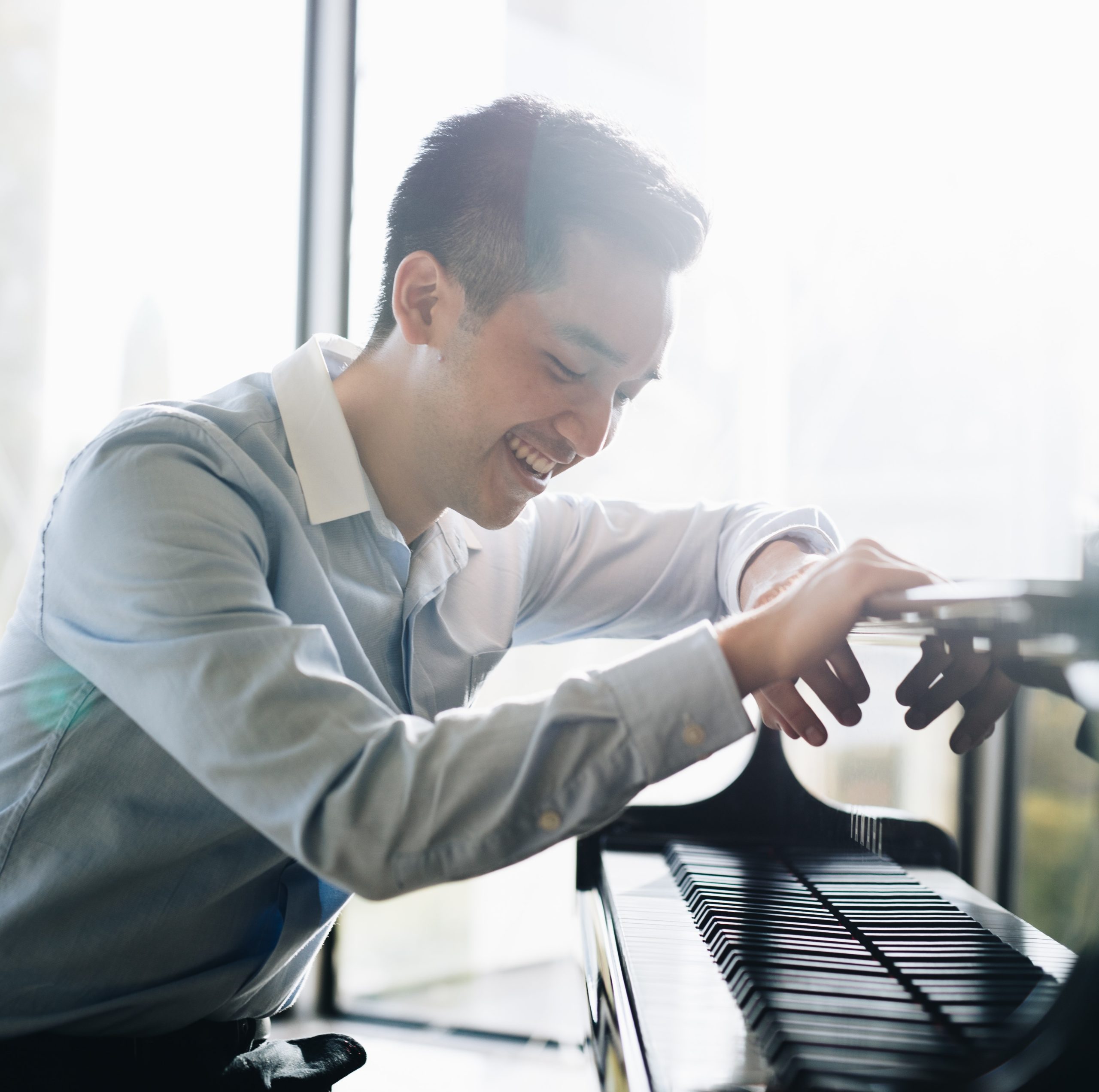 Masterworks 3: Lee on the Keys

Pianist Michael Lee joins the Newfoundland Symphony Orchestra under the direction of Marc David for an evening of classical music.

Featuring the world premiere of Peter Gardner’s Two Metres as well as Mozart’s Concerto for Piano No. 20 in D minor, K.466 and Haydn’s Symphony No. 45 (Farewell) this will be a delightful evening for all to enjoy.

Join us before the concert for our digital pre-show featuring Listen Up! hosted by Dale Jarvis. Listen as we go behind the scenes with interviews of the artists, musicians and composers behind our concerts. Click here to watch!

Michael Lee enjoys an active and wide-ranging musical career as both a solo and collaborative pianist. He has performed throughout North America and Europe, studied at eminent music festivals and has worked as a répétiteur and music director for opera productions. Recent concert engagements have taken him around Ontario and through the southeastern US.

In addition to his performing career, Michael is an equally passionate teacher dedicated to fostering a new generation of musicians. He is currently an instructor at the University of Toronto, has previously served as an adjudicator for music festivals and has also been involved in many outreach projects with the goal of disseminating classical music to youth.

Michael was born and raised in St. John’s, Newfoundland. He holds two graduate degrees–a Doctor of Musical Arts and a Master of Music–from the University of Toronto, and a Bachelor of Music from Memorial University of Newfoundland, where he was awarded the University Medal of Academic Excellence upon graduation. His most influential musical mentors have been Marietta Orlov and Dr. Kristina Szutor. He has received full scholarships for his studies at each institution.

2 Metres – a familiar phrase nowadays -was composed in 2020 by conductor and violinist Peter Gardner, a familiar name to concert-goers in Newfoundland & Labrador. The full title, 2 Metres for Socially Distanced Chamber Orchestra, refers to national and provincial guidelines which require social distancing in all gatherings including the arts.  This means that all NSO musicians must be 2 metres apart on stage for rehearsals and concerts. Peter Gardner has dedicated 2 Metres to the entire NSO team for their extraordinary efforts to present a full 2020-2021 season despite these social distancing requirements.  2 Metres is also dedicated to all the medical practitioners, care givers and support persons who have helped those afflicted world-wide.

In the composer’s words: In writing this work I wanted to depict the creeping cloud of COVID-19, its appearance, its demise and its stronger return. The creeping spread of the virus is given by the woodwinds, and later by all the strings as the virus gathers momentum on its return. The virus is depicted as small, quick motifs passed from player to player, just as the virus is assiduously spread from person to person. We ultimately arrive at a state of peace where the virus is finally vanquished by the skill and tenacity of those who have developed a vaccine. There is now hope for happier times ahead.

Wolfgang Amadeus Mozart, (1756-1791) was a keyboard virtuoso and composer from early childhood. Some of his earliest piano concertos were adaptations of sonatas by Johann Christian Bach, a composer who popularized the piano in England. Mozart moved to Vienna as a free-lance musician in 1781. His piano concertos from this time are striking are in terms of their exceptional quality and originality and the interplay between soloist and orchestra. Mozart’s Piano Concerto No. 20 in D minor, K.466 was premiered in 1785 with the composer playing and conducting from the piano.  Since Classical composers generally favoured major keys, Mozart’s choice of D minor, the same key as his opera Don Giovanni, represented an uncharacteristically dark mood.

The first movement Allegro begins quietly with a syncopated melody in strings accompanied by rumbling triplet motives. Flutes brighten up the orchestral palette with short solo passages. Oboes and horns add a rich background. Mozart had a particular fondness for the woodwinds. He took advantage of their distinctive colours and capabilities and liberated them from their traditional role of doubling the strings. Oboes and bassoons introduce a transitional passage to a gentle theme in second violins. The solo piano presents a new melody followed by rippling scales, arpeggios and rapid broken octave passages in unison, while the strings are supported by horns and bassoons.  Contrasting ideas in winds and pianistic embellishments enhance the orchestral texture while long solo sections display the virtuosity of the pianist. Mozart improvised the cadenza during performance, but written out cadenzas later became the norm.

The second movement Romanze in B flat major features a gentle melody for piano alone repeated by the orchestra. This alternation continues as a wind choir and horns create warm sonorities. A new lyrical melody in piano is accompanied by repeated notes in strings. The tranquil mood is shattered by a sudden outburst in G minor.  Intricate configurations and non-stop piano arpeggios are supported by winds. Forceful string punctuations announce a return to the genial piano melody which brings the movement to a sublime close.

Wolfgang’s father commented disapprovingly that the copyist was finishing the last movement Rondo just before the premiere performance.  The ink was still wet!  This D minor movement begins with a spirited arpeggio theme in solo piano. The orchestra joins in with syncopated rhythms. Alternating melodies with varied accompaniments lead to a cheerful F major theme in the woodwinds reiterated in the piano.  In general, the texture alternates between solo piano, piano with strings, or piano with winds.  Frequent motivic exchanges between winds and piano eventually lead to a grand orchestral tutti preceding the cadenza. Just as the turbulent Rondo seems to come to an end, the oboe presents the cheerful F major key theme now in D major. With boundless exuberance, the piano and orchestra continue in the major mode for an unexpectedly joyful finish in keeping with the Classical ideal: “Send them home happy!”

Franz Joseph Haydn (1732-1809) composed his Symphony No. 45 in F sharp minor (“Farewell”) in 1772 at the Court of Esterhazy. Pure energy propels the forceful Allegro Assai movement of this work, the only 18th century symphony in this key. The unusual tonality, dropping minor third arpeggios, agitated syncopations, sforzandi, and driving repeated notes portray elements of Haydn’s Sturm und Drang phase (1760s to early 1770s). Inspired by a literary movement of the same name, it allows for more emotional expression reflected musically by minor keys, driving rhythms, angular themes and sudden contrasts. The entire movement is based almost exclusively on the opening bars. In the development section, the theme switches to the major mode, but after an unexpected pause, a new lyrical melody appears. Following another pause the opening minor theme returns with even more intensity.   Sudden key changes, increased chromatics, louder dynamics and rhythmic accents bring this breath-taking movement to an abrupt end.

The graceful Adagio in A major starts with a dignified melody in muted violins accompanied by the other strings.  Delicate grace notes are transformed into short-long 16th note motives which take on considerable significance as melodic and accompanying figures. Expressive passages in first violin, poignant melodies in alternating major-minor modes, subtle syncopations and chromatic lines add more gravity to the middle section.  Though the winds generally double the strings, a few exceptions stand out, namely, short melodic statements in oboes and horns, and descending thirds in oboes with horn accompaniment.

The Minuet and Trio is full of Haydnesque surprises such as the key of F sharp major, major-minor mode shifts, and sudden dynamic contrasts. The Minuet opens with a sprightly melody in the violins with exclamations from oboes and horns.  Winds reinforce the strings most of the time.  However, the Trio conspicuously features horns to present the melody. Each section of this movement closes with a demure descending violin motif.

Sturm und Drang elements of the first movement are even more exaggerated in the F sharp minor Presto. Powerful orchestral momentum, reinforced by metric and dynamic surprises, comes to a screeching halt and a sudden pause! Here’s where the “Farewell” nickname comes from! Each year, Haydn and his orchestra spent months in the summer palace of Price Nicholas in Esterhazy.  In 1722, they were commanded to stay much longer than usual. Eager to return to their families they asked Haydn to intercede. This he did in a unique way.  Following the sudden aforementioned pause, he defied conventional expectations and wrote a charming Adagio in F sharp major. As the meandering tune proceeded, the musicians took turns “snuffing out their candles” and leaving the room. The music ends in a whisper with two muted violins playing in near darkness. Haydn’s plan to help his musicians worked. Prince Nicholas got the hint and sent them home happy!