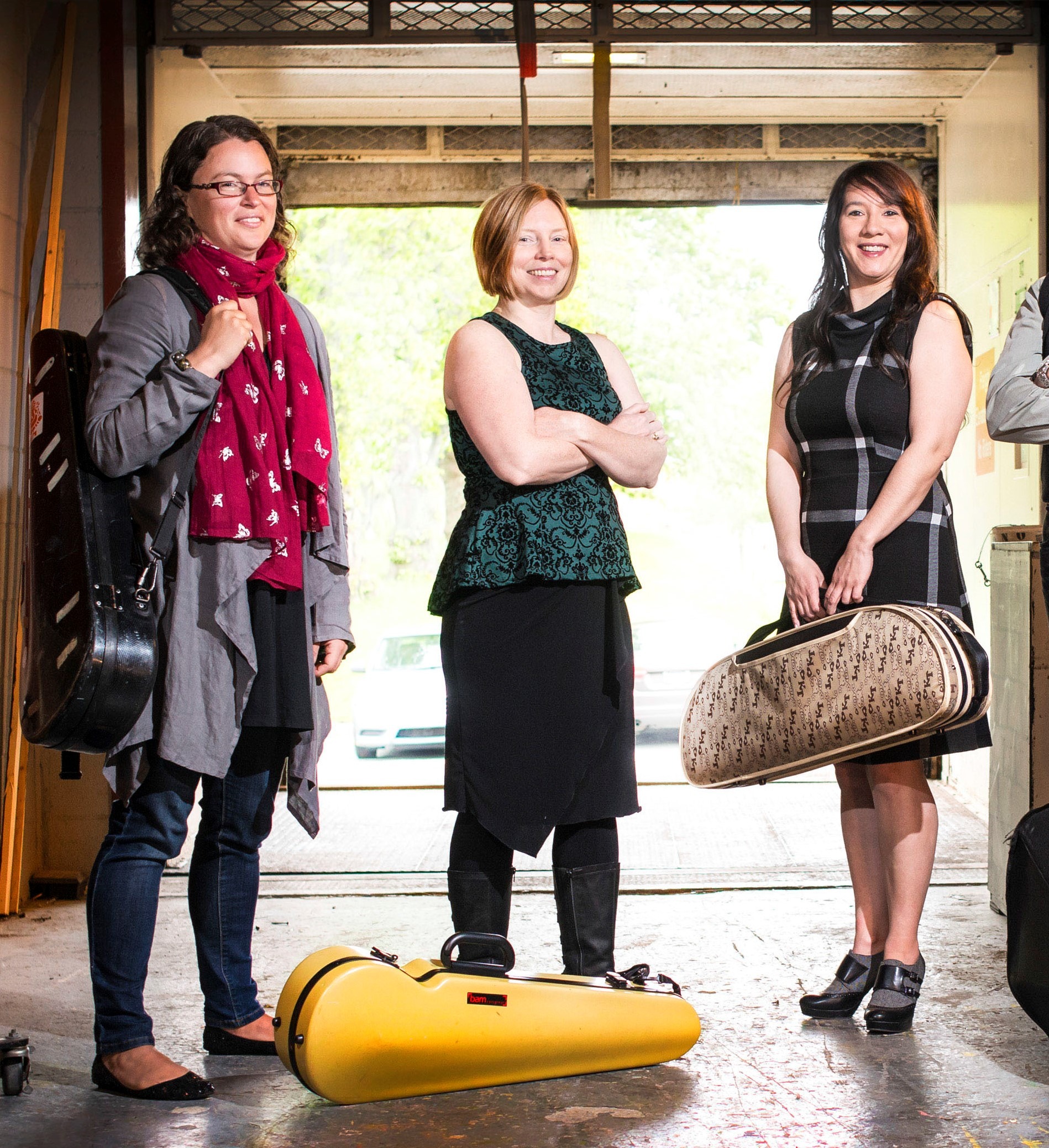 Join us before the concert for our digital pre-show featuring Listen Up! hosted by Dale Jarvis. Listen as we go behind the scenes with interviews of the artists, musicians and composers behind our concerts. Watch Now.

Get ready to unwind with a pre-show cocktail – this week’s feature is the Trinity Cocktail. Our friends at Piatto will show you how to channel your own internal mixologist here.

Heather Kao is a freelance violinist and teacher from St. John’s. She frequently can be seen on stage performing as a soloist, with the new music group Ora Ensemble, or with her partner Steve Power in the group Duet Ever. Heather is a Suzuki teacher and accompanist. She has been a guest performer on countless recordings, as well as on TV and radio. She has a performance degree from the Memorial University School of Music and is a past member of the National Youth Orchestra of Canada, Quintessential Vocal Ensemble and Lady Cove Women’s Choir. She has received many awards from the Kiwanis Music Festival including the Senior Rose Bowl, and has competed at the national level of the Canadian Music Competition and National Music Competition. She has played in pit orchestras for many local productions, including White Christmas, Our Divas Do Broadway, West Side Story, Fame, and Annie, to name a few. Heather has enjoyed performing and recording in many genres of music, from pop music with Hey Rosetta and Christa Borden to traditional music with Ennis.

Nancy Case-Oates
Nancy Case-Oates began her musical studies on piano and violin at an early age. As a teenager, she began her orchestral training with the Newfoundland Symphony Youth Orchestra, ultimately becoming concertmaster. She played two summers with the National Youth Orchestra of Canada and participated in master class programs at the Banff Centre and Orford Centre for the Arts.  As well, Nancy participated in the Aberdeen International Youth Festival and toured Scotland with the Montreal Civic Youth Orchestra. Upon high school graduation, she left the province to acquire degrees in performance from both Universities of Toronto and Victoria.  Since returning to Newfoundland, Nancy has been active as a performer and pedagogue and is currently the Principal Second Violin of the Newfoundland Symphony Orchestra and Second Violin of the Atlantic String Quartet. She is also a founding member of the Pachelbel Trio, with whom she has performed around eastern Newfoundland and St. Pierre (FR).  Nancy is violinist with the recently formed Atlantic String Trio and through her affiliation with the Suzuki Talent Education Program of St. John’s she is a Suzuki-trained teacher and a faculty regular at the Atlantic Canada Suzuki Institute.  An opera enthusiast, she has performed in various productions with the U of T’s Opera school, U Vic’s Faculty of Fine Arts, and Opera on the Avalon.  Nancy appears on Kim Stockwood’s Back to the Water (2012), Jim Duff’s Jazz Mass (2008), and on YouTube with Duane Andrews in the video Raindrops

Kate Read
Kate is a member of the Atlantic String Quartet and Principal Violist in the Newfoundland Symphony Orchestra. In 2004 Kate won a position with the BBC Symphony Orchestra, London, England where she was a member for 6 years. Kate also regularly played with the renowned Academy of St Martin-in-the-Fields, London Symphony Orchestra and Philharmonia Orchestra. In 2011 Kate moved to the north of Norway to play with chamber group MiNensemblet, with performances both in Norway and internationally. Kate joined Dark by Five, resident ensemble at Gros Morne Summer Music in 2015. In the spring of 2015 Kate commissioned, produced, performed and created the visuals for multimedia work IcElation, which premiered at Memorial University of NL. Previously, Kate was co-producer of multimedia Ensemble Meduse, and has collaborated with Arkora (Canada), Artistic Fraud of Newfoundland, and Opera North (UK). Kate is sessional Viola professor at Memorial University.

Edward Elgar (1857-1934) is best known for his ever-popular Pomp and Circumstance Marches. Though his earlier works were received with a polite lack of enthusiasm, his Enigma Variations (1899) brought him considerable fame, respect and even a knighthood in 1904.  He learned to play violin, piano, organ and bassoon but was largely self-taught as a composer. Though indubitably associated with Britain, his works were largely influenced by Continental composers, among them Schumann and Brahms whose music he heard whenever he travelled to Europe.

Hot on the heels of his knighthood and at the height of his fame, Sir Edward Elgar wrote Introduction and Allegro for String Quartet and String Orchestra, Op. 47   for the newly formed London Symphony Orchestra in 1905.  The work is loosely based on the Baroque Concerto Grosso in which a small ensemble is pitted against the larger orchestra.  The Introduction opens tempestuously with heavily accented descending triplets reinforced by double stops in all strings. The solo quartet introduces an upward theme which is taken over by the orchestra in flexible ever-changing rhythms. A winsome new melody in solo viola is expanded at length in the entire ensemble. Powerful chords lead to the Allegro which begins with the upward string quartet theme from the Introduction. This is followed by a vigorous section in driving 16th notes first in the quartet then in both ensembles. Elgar works out these ideas in combination, alternation and variation.  A highlight of this work is what the composer called “A devil of a fugue!” The fugal subject in 16th notes is strenuously worked out, rhythmic and fugal fragments are tossed about, and astonishing scale passages run the gamut of all the strings. As the devilishly difficult fugue comes to an end, previously heard materials return even more intensely than before. A grandiose orchestral version of the earlier solo viola melody brings the piece to a jolly good, rip-roaring finish. In response to the lukewarm reception of this work, Elgar wrote, “Nothing better for   strings has ever been written and yet, they don’t like it!” This piece eventually became more accepted and is now considered a masterpiece by the leading English composer of his generation.

Over the course of music history, many performers have been suspected of being “in league with the Devil.”  Their astonishing techniques were deemed beyond the powers of mere mortals.  In addition, there have been countless works with satanic associations, such as Orfeo by Monteverdi, Don Giovanni by Mozart and Histoire du soldat by Stravinsky. In the case of Giuseppe Tartini (1692-1770), the Devil appeared to him in a dream! Violinist, composer and theorist, Tartini spent most of his life in Vienna and Padua except for a three year sojourn in Prague. He composed hundreds of violin concertos and sonatas as well a few religious compositions. As a teacher and composer, he was more interested in emotional nuance and expression than in showy technical display. Nevertheless, his violin techniques are characterized by increased speed, double and triple stops and an impressive variety of figurations.

In his later years, Tartini recounted the catalyst for the Devil’s Trill Sonata in G minor to French astronomer Jérome Lalande. He dreamed that the devil was his servant who obeyed his every command.  Tartini gave him his violin and the devil played a bewitching sonata with unimaginable mastery.  The composer woke up suddenly and tried to write what he had heard, resulting in this diabolically conceived piece. The first movement Larghetto affettuoso is an expressive melody in siciliano style.  Its eloquence in enhanced by echoing passages and affective double stops. The spirited Allegro begins with a “Ta-da!” gesture and continues non-stop with snappy grace notes and appoggiaturas in every bar. The last movement alternates between lyrical slow and virtuoso fast sections. The impassioned opening Andante melody is followed by technical wizardry in the Allegro assai. Rapid descending arpeggios, repeated notes, double and triple stops, and constant trills give way to an even more melancholy Andante. This is all a warm-up for the fiendishly difficult “Devil’s Trill” section in which the solo violinist plays the melody or melodies accompanied by trills.  This must be seen and heard to be believed. It is uncanny, almost inhuman, downright demonic!

It’s not clear when this, Tartini’s most famous work, was composed, but it was not published until thirty years after his death. No wonder!  Admitting that “The Devil made me do it!” would have earned him nothing but ridicule and scorn.

Wolfgang Amadeus Mozart (1756-1791) composed his Sinfonia Concertante for Violin, Viola and Orchestra in E flat major, K. 364 in 1779 while he was still unhappily employed by the Archbishop of Salzburg.  The 23 year old composer had recently returned from a trip to Paris and Mannheim, where he was seeking new ideas and opportunities. Mozart was intrigued by the Sinfonia Concertante , a fusion of symphony and concerto, in which the solo instruments form part of the symphonic ensemble but are also noticeably on display, in concerto style, throughout the piece.  He made some experiments in this relatively new genre which was especially popular in Paris.

Sinfonia Concertante for Violin, Viola and Orchestra , K364 was composed for an orchestra of two oboes, two horns and strings, as well as solo violin and solo viola.  The solo viola part is written scordatura, a deliberate mistuning which produces extra brilliance and resonance. Mozart preferred the viola to other strings, and enjoyed playing this instrument in string ensembles. It is no wonder then that he gave the solo viola equal billing with the solo violin.

The Allegro Maestoso begins with a tutti fanfare followed by a descending arpeggio statement. A dramatic transition leads to a new melody first in horns, then oboes, accompanied by strings. Accompanying winds enjoy short solos in this movement. An ascending motive proceeds crescendo in majestic fashion until the solo violin and viola magically emerge out of the orchestra on a long sustained note.  The soloists continue as equal partners in terms of material and techniques.  They take turns with melodies, engage in dialogue, toss about question-and-answer fragments, accompany each other and often play together in unison or in thirds.  A brief cadenza for two, composed by Mozart, features graceful melodic gestures, meaningful pauses and trills, all requiring great precision in order to sound improvised.

The choice of C minor for the second movement Andante might be considered a reflection of Mozart’s grief for his mother who died during their Paris journey. A mournful melody in solo violin is supported by solo viola with light orchestral accompaniment. Then the roles are reversed.  The orchestra continues with a multitude of Mozartean melodies intricately elaborated by the soloists.  Plaintive pauses, a new horn melody, and wind punctuations lead to another cadenza in which the soloists take turns accompanying each other, ending with expressive trills in thirds. This exquisite movement ends in peace and tranquility.

The Presto opens with a perky theme for orchestra and soloists.  Wind instruments provide colourful gestures as well as new materials.  Animated dialogues, alternating melodic ideas and modes, variants of the opening theme, and rhythmic vivacity characterize the Presto from its buoyant beginning to its exuberant end. Thanks to Mozart’s melodic flair, emotional depth and irrepressible spirit, his Sinfonia Concertante for Violin, Viola and Orchestra is one of his most beloved compositions.