Our choristers, director, accompanist, and executive

What's on the go?

Explore the PCNSO's past events

The Philharmonic Choir of the Newfoundland Symphony Orchestra (PCNSO) is a community choir based in St. John’s, Newfoundland and Labrador, Canada. Founded in 1987 as an oratorio choir specifically to perform Handel’s Messiah with the NSO, the PCNSO has broadened itself substantially and now performs several concerts each season with a wide variety of repertoire. The PCNSO continues to be dedicated to working cooperatively with the NSO to foster and perform symphonic choral music.

The mission of the choir can be summarized in the following three goals:

To work toward becoming the finest choral ensemble it can be, thereby providing its singers with one of the most fulfilling musical and educational experiences of their lives.
To make all those associated (executive committee members, singers and supporters) proud and excited to be a part of the organization.
To provide significant, worthwhile and beautiful choral performances to the greater St. John’s community. 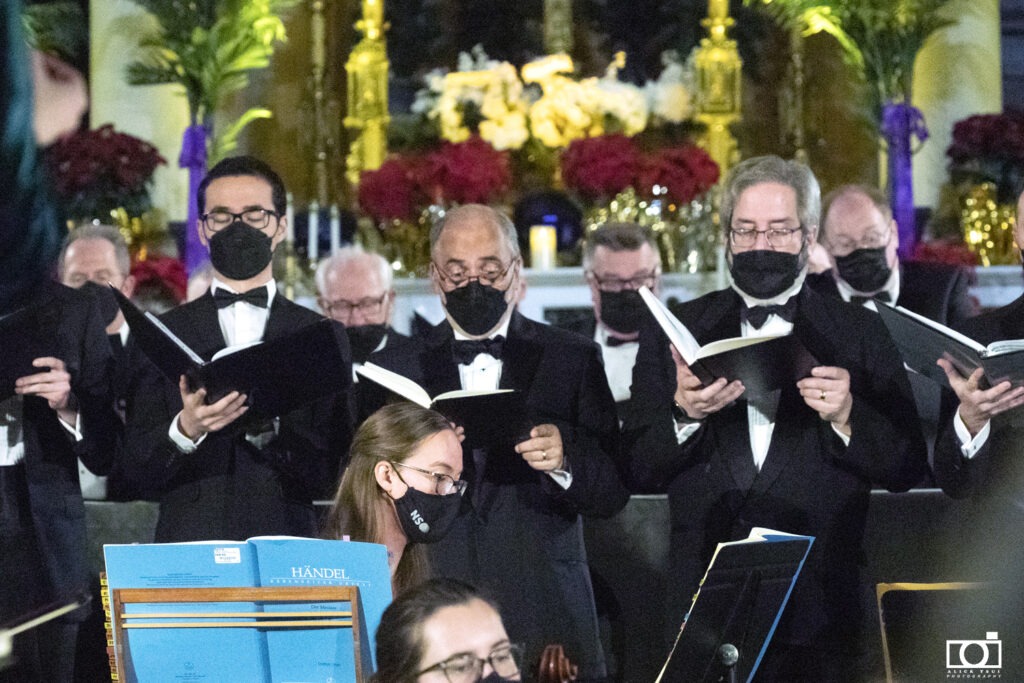 The following is adapted from “Evolution of a Choir”, written by choir member and Chair from 1997 to 1999, N. Roy Chaytor.

In the summer of 1986 Peter Gardner, the Newfoundland Symphony Orchestra’s Artistic Director, and Douglas Dunsmore, director of the MUN Festival Choir, were discussing the difficulties of scheduling works for orchestra and chorus. Relying on the Festival Choir had been challenging because of its membership being primarily university students. Gardner and Dunsmore brought forward to Mario Duschenes, Principal Conductor of the NSO, the idea of performing Handel’s Messiah with a newly formed dedicated orchestra chorus. With the help of Maestro Duschenes the marvelous Basilica of St. John the Baptist was arranged for the occasion.

The artistic and financial success of the first pair of performances conducted by Maestro Duschenes in December 1987 initiated and compelled the present tradition of annual performances of Messiah at the Basilica. The Philharmonic Choir traces its roots to that first aggregation and those groups of singers called together each year to prepare the next performance. Over the following years other oratorio and choral works were performed in addition to the annual presentation of Messiah.

In the early 1990s, rehearsals were scheduled more frequently and a stable membership became essential. Consequently the choir established its first constitution in January 1995. The constitution allows the choir to set its own goals, while cementing its long-standing relationship with the NSO. To facilitate cooperation and communication between the two organizations, the Chair of the Philharmonic Choir is an ex officio member of the Board of Directors of the NSO.

The 500th anniversary in 1997 of John Cabot’s discovery of Newfoundland saw the first installment of Festival 500: Sharing the Voices, a major international choral festival to be held on a biennial basis. The 1997 festival, to which the PCNSO was accepted, also coincided with the choir’s progression from oratorio to being a concert choir in its tenth season. The choir performed works by Faure, Eleanor Daley, John Rutter and others in a performance that was very well received. The Philharmonic Choir is pleased to have participated in each Festival 500 since.

In recent years the Philharmonic Choir has continued to perform major choral works such as Messiah and Mozart’s Requiem with the NSO, but has also increased its community concert activities in the eastern part of the province with concerts in Harbour Main, Torbay, Ferryland, Brigus and Bell Island since 2000.

In addition to its parent organization the Newfoundland Symphony Orchestra, the PCNSO is proud to have been associated with a large number of organizations and individuals over the years.  External links will open in their own windows.

St. John’s is home to an extremely vibrant choral community. Members of the PCNSO are or have been involved in several other local choirs, including:

Information
We welcome enquiries and suggestions from the public regarding our concert schedule and repertoire. Or perhaps you are interested in sponsoring or hosting a concert?

Membership
Membership in the PCNSO is open to amateur singers in the St. John’s area who are willing to make the necessary time and financial commitment, subject to an audition process. Under normal circumstances full-time students are not accepted due to the likelihood of conflicts with the student’s exam and study schedules. Dues are $175 per season (music and special event fees are extra).